All ancient peoples told us the same story

“Yes, Torah, Judaism and Kabbalah do teach that we are not alone. We are not alone in our universe,
nor are we alone here on our own planet. In Biblical, and later Judaic, and Kabbalistic literature,
there is a long documented record of encounters with entities not of this Earth.” – Rabbi Ariel Bar Tzadok

6. Reason 5: All cultures, one story – All ancient peoples told us the same story;
7. Historical Validity: Greek gods – Myths cannot be purely made up but they have a core of truth. Individuals considered gods by human beings are likely to have existed;
8. Out of place stories: Following the steps of a prominent contemporary historical revisionist we will pretend that the ancient authors were not telling fairy tales but reporting chronicles of real events.

We talked about ancient texts that tell of “gods” who came here on Earth from heaven. They were aliens who were mistaken for gods and, endowed with an infinitely superior evolutionary and technological status, divided the planet among themselves and ruled it as colonizers and absolute sovereigns.
Their deeds and the stories of those mythical times when the “gods” ruled over Earth were recorded in writings that initially contained an alien truth, which later became a sacred truth. What writings are we talking about? As we have seen in the first part of this article, we are referring to the so-called “sacred” books of the major religions. They were not telling us the story of God but the story of the “gods”, that is, the story of the ancient astronauts.

The Bible, the Quran, the Indian Vedas or the Mahābhārata, the Sumerian-Akkadian myths such as the Atraḫasis or the epic of Gilgamesh, or even The Iliad and The Odyssey and many, many others: all these ancient texts do not speak to us of God, nor are the fruit of an invented, fantastic and anthropomorphic religiosity, but they are historical chronicles that tell us about the ancient extraterrestrial colonizers and the times in which they ruled human destiny.

On closer inspection, in fact, all the sacred books of all ancient peoples have told us about nothing but the first extraterrestrial invasion of planet Earth and the events that followed.

Someone very powerful had come from afar. Who?

The Akkadian Sumerian myths called them Anunnaki. The descendants of Sumerians, the Jews, long after called them “Elohim” and they are the protagonists of the Bible. In Greece these powerful “gods” were called Theoi while in the Indus valley they were known by the name of Deva.

All myths agree that their way of ruling was generally brutal and tyrannical with a few exceptions that confirmed the rule and that to them we owe the introduction of knowledge and technology, the introduction of agriculture, writing, politics. All these myths describe the technological means of the gods starting with their very powerful flying means of war. All of them say that the ancient “gods” knew and practiced genetic engineering.

All of these myths, written by hundreds of authors of the ancient world, separated by thousands of miles (and years) tell identical stories, with data and information that turns out to be consistent across all of them not only on the general narrative, but on virtually all the important details about those ancient “gods”; their wars, their military strategies, their personal attitudes, their needs, their projects, the way they behaved with each other and with their subjects, the ways in which they themselves went into battle, or the incredible super-technological weapons they used.

Once landed, the deities divided the planet and its peoples among themselves and for a very long time they waged war with clear objectives of dominance and territorial conquest. Each of the terrestrial “nations” was in constant struggle with its neighbours, and each of them was ruled by a god-alien-ruler even if, not infrequently, some territories were jointly ruled by pairs of alien rulers, as in the case of Athena and Hephaestus who jointly ruled portions of the Greek world.

Different places, different peoples and different alien kings, but all part of the same incredible story of Earth’s alien invasion and conquest.

The true story of the Bible is then not the story of God but the story of the ancient aliens, called “Elohim” (אֱלֹהִים), a story that the biblical authors told us from the point of view of Hebrews and their alien ruler god, Yahweh.

Similarly, the Akkadian Sumerian myths are not the tales of invented men and “gods”, but of real men and “gods” who actually lived four thousand years ago in the Middle East and Gilgamesh was not a fictional character of antiquity but a real “demigod” who really went on a long journey in search of eternal life.

The same is true of the Indian Vedas, a very ancient Vedic Sanskrit collection of sacred texts of the Aryan peoples which four thousand years ago, recorded the same story: someone very powerful had come from the skies, the gods; they called them “Deva”.
Homer, in his two epic works, the Iliad and the Odyssey describe in great detail the ancient events that involved gods and men of Hellenic Greece.

What then if the stories about the ancient gods were, in fact, not myths but historical truths? What if the ancient “gods” really came here on Earth from the distant stars?
We want to mention two authors below who seem to wink at this idea:

Paul-Marie Veyne, French archaeologist and historian, specialist in ancient Rome and member of the École française in Rome from 1955 to 1957, wrote, among many others, a book entitled “Did the Greeks Believe in Their Myths?“, a very important work which helps us understand our position about the so-called “out of place” ancient stories.

Regarding the historicity of the ancient Greek myths, he says:

“Sabone believes that every myth has an educational purpose and that the poet (i.e. Homer) did not write the Odyssey just for love for poetry but to teach geography, and therefore it is impossible for a myth to be entirely mythical. The voyages of Ulysses are a geography course where everything is truthful … Palefato does not question even for a moment the historicity of Daedalus, of Pelops, of Aeolus, which he demonstrates, as did Polybius, he admits that in those distant times the gods were united with men. Athens and Apollo really participated in the torture of Marzia and Apollo really loved hyacinth, even if it would be childish to believe that this god wrote the name of his lover on the petals of a flower, the reality is that Apollo limited himself to giving to this flower the name of the beautiful adolescent …” “Homeric poems should be deciphered in historical terms despite their fantastic appearance. Homer was a historian back in the days when stories were not used, neither was known how to tell them in prose. His verses would therefore correspond to the need to hand down a chronicle of facts that at the time could not be expressed in any other way … in short, we believe that we can rightly affirm that at this point the wide diaphragm between myth and history, subject to the necessary archaeological checks, it seems to have suddenly and considerably thinned. The Bronze Age, which has so far been shrouded in a very dense darkness, has probably now found not only its cantor, that is, Homer, but also its first extraordinary chronicler, geographer, ethnologist and historian.”

Both authors had no doubts about the historical reliability of the Homeric poems, allude to the idea that superior beings considered gods by the Greek people are very much likely to have existed with their names, characteristics and powers, and what might have happened is that those reports were later modified or rearranged. Yet, they had to come from an essence of truth.

8. Out of place stories: Let’s pretend it really happened

Ancient “out of place” stories are very special, indeed. 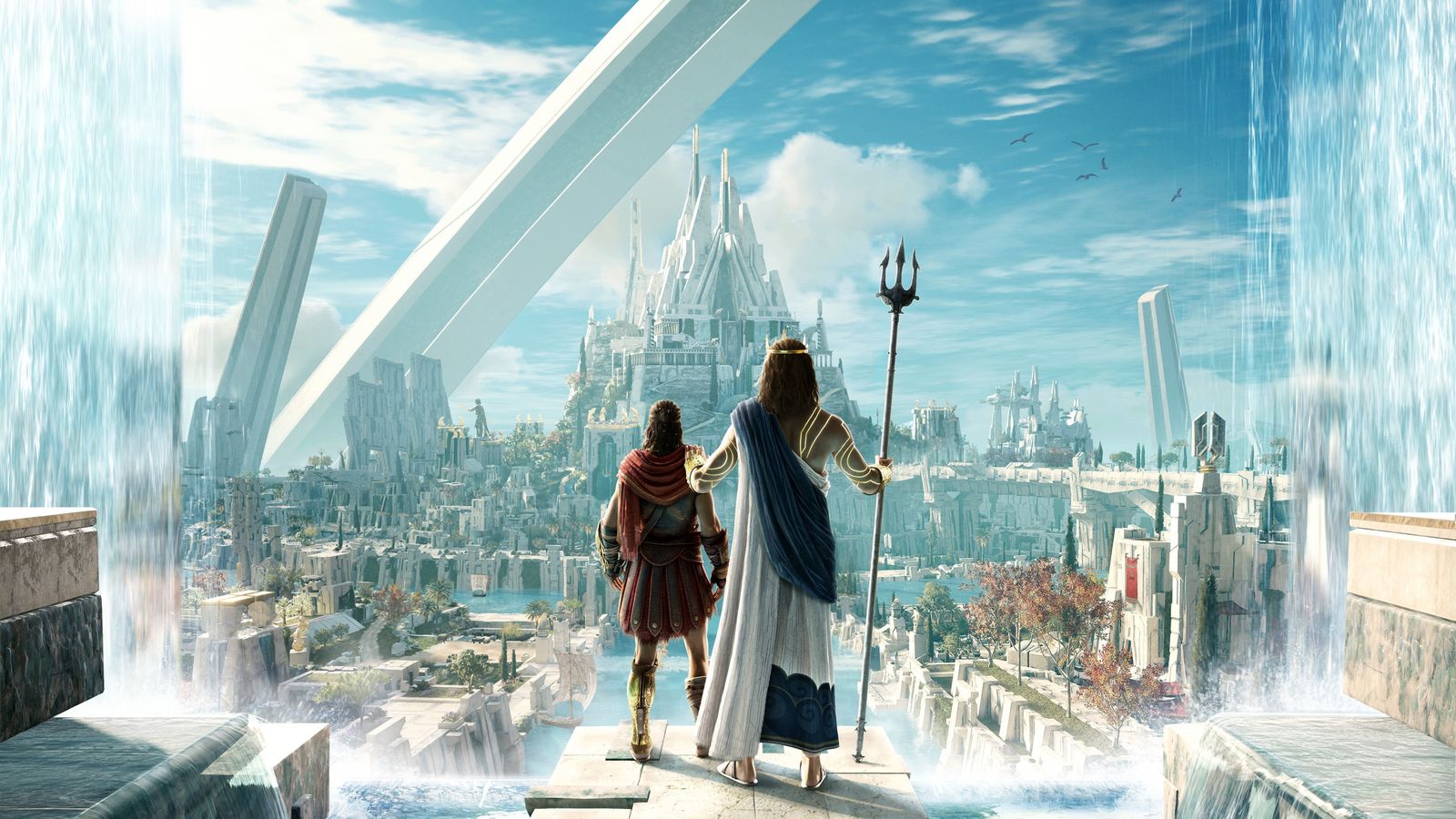 We are looking for the ”impossible” truths contained in ancient myths; truths that cannot be denied simply because they are deemed “impossible” by the dominant mainstream historical thought.
Our work starts with an intriguing question: what if it was all true? What if those ancient books told true stories that we, thousands of years later, have wrongly mistaken for fantasies?

Following the steps of a prominent contemporary historical revisionist and recurring voice in our eXtraHuman journey, Mauro Biglino, we will pretend that the ancient authors were not telling fairy tales but were serious. We will pretend those ancient stories actually happened.

Many think those stories are mere fantasy; many others think the opposite. All we suggest is that you stick with us. Let us pretend together that the stories you will read below really happened and enjoy the ride.
You will judge for yourself. The journey is long, and in a long journey reality sometimes is stranger than fiction.

“When the Most High (Elyon) divided the nations, when he separated the sons of man, he established the boundaries of peoples according to the number of the sons of the Elohim”  – Deuteronomy 32:8

What you can expect from the next section: As one of our areas of interest and in–depth analysis, we will provide a short and rich overview of impossible stories contained in ancient myths and we will explain our method for approaching and interpreting the ancient texts that led us to capture the hidden essence of their content.