News in physics and space exploration point to a crowded multiverse

“The universe is a pretty big place. If it’s just us, seems like an awful waste of space.” – Carl Sagan 7. Simplicity of the universe: The discovery by Professor Turok that our universe is simpler than a cell gives a new perspective. A perspective that cells might be universes themselves and our universe might be a cell to a higher order and so on in a limitless way. In other words: we live in a crowded multiverse.
8. The ubiquity of waves: Everything and everybody in the universe are waves and this means to us that the universe is illusory due to its holographic nature. Such an illusory environment has an increased capability to sustain a crowded multiverse.

7. Simplicity of the universe

Given the title of Neil Turok’s speech that I make available here once again, the academic monologue is rightly opened with one question: “What do I mean with simplicity?” I paraphrase Neil in his answer: “Well for a physicist simplicity is about bringing together disparate ideas, make sense of them and simplify them; it is about embracing concepts which unify”. And again, “Simple concepts are ones which allow us to explain the most we possibly can from the least possible number of assumptions”.

We at eXtraHumans have the same objective: making sense of the reality around us by capturing its overarching essence, in the simplest way possible. Neil Turok states that the universe is surprisingly simple. What makes him say that and what are the implications of such a stance?

This map of the visible universe shows a pattern of the variation in the density across the sky. The first element that contributes to define the universe as simple is the symmetry of heat. Through advanced methods of detection we know that galaxies around us have similar heat levels. How is this heat equality possible?

Variations of temperature were excited at the Big Bang and subsequent to that they have oscillated a certain number of times. Since they cannot be seen in the map, scientist apply a Fourier analysis to this picture and look for oscillations. By measuring amplitude against pitch we can find waves who have different peaks.

What comes out of this analysis is a spectacular synchronicity of vibrations all around us from the big bang as if the universe is a giant bell struck at the moment of creation (Big Bang).

In other words, an unbelievable simple pattern came out of the Big Bang, scale free. This means that vibrations as big as the black hole and as small as the Plank measurement resonate in the universe in the same way. A total uniformity of vibrations at all levels that have a direct correlation with heat and as we shall see shortly in the next and final chapter, with the fabric of the universe itself. A crowded multiverse totally in sync with itself across all layers.

Can we assign a number to or somehow quantify the simplicity of the universe? Neil Turok warns us that the variations in the temperature across the visible universe are 1 part in 100.000. Given its unfathomable size, Neil Turok confidently states that the “universe is uniform in all directions”. He adds that the universe is as simple as a single cell and it is exactly this number that describes the pattern of the universe: 1 in 100.000. To put the matter in the right perspective, “these are fewer number that you [would] need to describe a single atom”. He concludes: “The biggest thing we know is the simplest thing”; and again: “The universe is as simple as its simplest atom”. The visible universe. Credit to: https://science.nasa.gov/observable-universe

There are obviously plenty of unanswered questions: “The universe has regular, predictable behaviour which we still do not understand”. Neil obviously believes in the potential of science and how we will progress our understanding of the universe in the future.

For now, given some “very very good clues” we have about this topic, Professor Turok is confident about what future theories may say: “The tiny scale is simple, the big scale is simple […] maybe there is a relation between the tiny scale and the big scale. If there is, that would be a totally new type of physics […] Why do we think that tiny things and big things are different? If they are both extremely simple maybe they are the same, so I tend to think that is where this is leading us”.

Outside of his talk, Neil Turok became explicit: “It may be that we live in an endless universe, both in space and in time”. 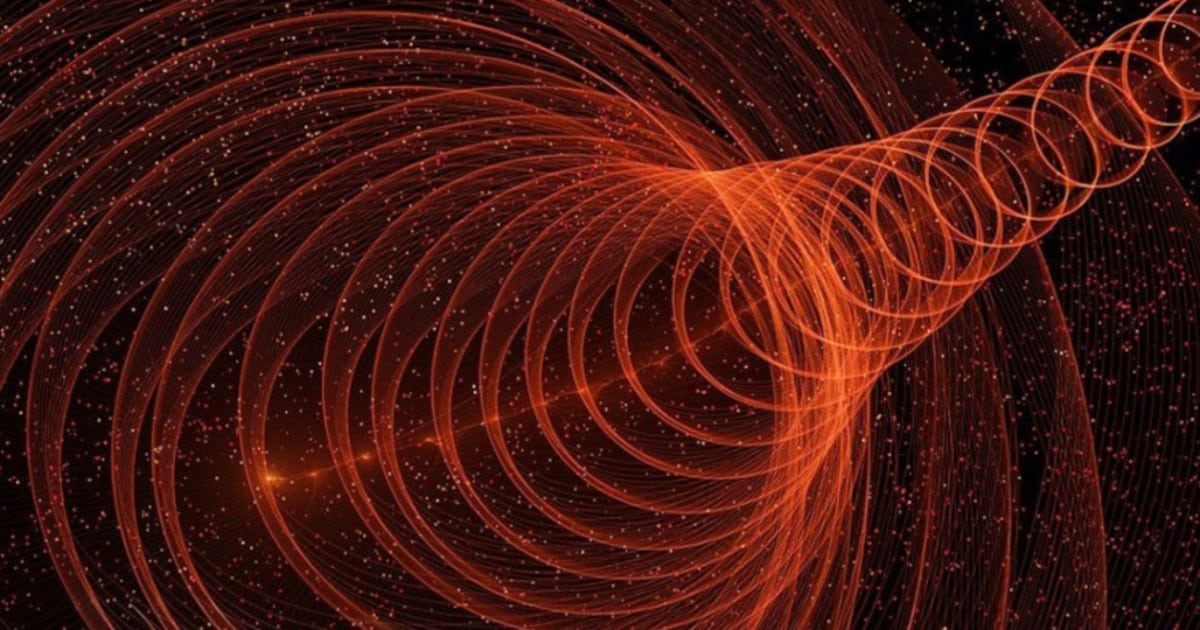 Where Neil Turok’s findings are leading us seems logical and intuitive: the corresponding simplicity between large and tiny represents a pattern. Our cellular level and our universe are part of a series of levels in our reality. With the expansion of the series, we can expect layers of “complexity” represented by beings, contained by layers of simplicity, their environment. In essence, we would be dealing with an infinite vastness of realities that would contain an infinite number of beings and to us they would be aliens. Again, we will dig further into the structure of the multiverse – characterised by the core symbol the fractal – in upcoming articles. For now we can take in all these new discoveries and reflect on its potential implications, bearing in mind that it is the Professor himself who suggests the existence of a crowded multiverse.

The next and final chapter will be slightly different and add a new, possibly unexpected and yet critical and supportive component to the current theory proposed here: the existence of a crowded multiverse.

8. The ubiquity of waves

The final key point covered by Professor Turok concerns the fabric of the universe. Alongside fractals, waves contribute to make the universe/multiverse possible and what is more, they are at the base of our reality. We do not perceive them but waves are everywhere. Let us rephrase it: everything is a wave, including human beings. As a consequence, aliens are also waves.

As we have seen in the previous paragraph, vibrations are being easily detected as part of our “perceivable reality” and are everywhere. Vibrations and waves have a direct correlation: vibrations are the cause of waves. Thus waves are everywhere. Albert Einstein would have no problem acknowledging it. Waves are therefore accepted by the General Relativity viewpoint. Quantum Mechanics makes of waves a fundamental pillar. Both major physics theories accept or incorporate waves. How can this help us unravel the mystery of the universe? A special radiation may come to assist us.

As is widely known, Einstein’s Relativity and Quantum Mechanics (also known as Quantum Theory) are incompatible with each other. They do however share a common trait: light. Debates over whether light is a wave or a particle have raged in the world of physics since 1700. We now know that light is both a wave and a particle. And it is exactly the duality of light to bring the two theories together since each property fits one of the theories: the light behaving as a particle acts according to Einstein’s Relativity, and the light behaving as a wave acts according to Quantum Mechanics. This duality that has baffled scientists for centuries might exactly be that clue we need to peer behind the curtains of our true reality and understand whether we are living in an illusion, meaning that the fabric of reality escapes our senses, or whether what we see is all there is.

In Quantum Mechanics, light as well as water has been used for its fluid properties. Both water and light act in the same way, with waves generated by them or within them that interfere with each other. And both are representative of all matter in the universe when it comes to dynamics measured by Quantum Theory, since at the microscopic level everything comes down to being a particle and, obviously, a wave. Professor Turok giving a demonstration of the wave-particle duality in his speech. Credit to: https://www.youtube.com/watch?v=JV7K8CvA26I&t=1s

As we have seen in The Quantum Foundation in correspondence to the double slit experiment, the part of light that is wave is exploratory but “it gets choosy when delivering”. So it is a possibility wave.

If that is true, then we are not living in a universe but rather in a band of frequency, where waves are frequencies and particles are information. Such type of construct is exactly what defines a holographic projection. The implications of a holographic universe range from spirituality, physics, morality, psychology and pretty much every domain of the human experience, including the existence of other intelligent beings in some form and at some plane of existence. The overwhelming amount of consistent information that we encounter makes it impossible for us to disregard it; the likely existence of a holographic universe touches both the alien reality and the mysteries in the universe, both dear concepts to eXtraHumans. This information may seem to have little to do with the idea of a crowded multiverse but since light plays such a critical role in the fabric of our cosmic habitat, it leads us to think that light might exactly be what keeps it together! Light might be the holographic DNA of our multiverse, which would not be unimaginable given how a hologram works. The power source to keep a multiverse on would be obviously monstrous and would justify the bizarre behaviour of light that is unreachable even at speeds close to the speed of light. Light would be powered by an ultra powerful and special source.

Moreover, light is one form of electromagnetic radiation (as are X-rays, radio waves, and others). The connection between electromagnetic waves and light was understood by Maxwell in 1861, thereby unifying the theories of electromagnetism and optics. The relationship between optics and light will lead us to explore the experiments and theories of Karl Pribram, a psychology and psychiatrist professor who supported the view of the human brain being holographic.

Circling back to Professor Turok’s statements, we have already seen how “the universe does not recognize scale. A wave that is crossing through the universe has the same strength of something 1 million times smaller”; he describes it as an “unbelievably simple pattern”.

Another Physics professor, with an even more visionary approach, described quantum waves as having a steady power, similar to each other, that are able to influence any point in the universe. This Professor was David Bohm, he was a firm believer of the universe being holographic and we will study him in depth.

This chapter brought to light two unbelievably massive and critical concepts: the multiverse (a crowded multiverse) and the holographic universe. We believe these two theories to be not only compatible but to be even matching logically. Why? Because it is exactly with an illusory system that anything can be done, so why not replicate a universe in an infinite way when all you need to do is … programming it?

“The multiverse exists because every choice we make creates a fork in the road, which leads into a parallel world.” – Blake Crouch